WHERE DID YOU GROW UP:  Rockford, IL - it's 2 hours northwest of Chicago, and it's often voted as one of the top 40 worst places to live in the country. We did however give the world Cheap Trick and the Rockford Peaches.

WHEN DID YOU FIRST BECOME INTERESTED IN PHOTOGRAPHY:  When I was a toddler I used to build fake cameras out of duplos. I was a bit of a tomboy growing up, so I was also interested in a lot of other things - electronics, cars, trains, video cameras, dinosaurs, chemistry, and of course robots. My professional interest in photography started in high school when I was a yearbook photographer. My high school sent our yearbook team to photography camp at Indiana University for a week, and I learned how to process, shoot, and print black & white film. It was an enlightening experience, and at that point I really saw the magic of photography. After that, I spent a lot of my high school years hanging out in the darkroom. I definitely miss those darkroom days! And those delicious smells of toxic chemicals.

WHAT INSPIRES YOU:  I love taking environmental portraits, and I'm constantly inspired by the people whose photos I've taken. I love it when you can see a subject's personality in their space. What's great is when you see someone's space and it is completely 100% a reflection of themselves. I love getting to see the workspace that a designer creates in, the little things someone has collected from around the world, the artwork that someone loves. These are the things that reflect a bit of ourselves and what makes each of us unique, and I find that really interesting.

I love meeting new people and hearing how they got started, how they became who they are. I think people who are passionate about anything are inspiring.

DO YOU HAVE A FAVORITE IMAGE THAT YOU'VE TAKEN:  One of my favorite pictures that I've taken is a portrait of a dog dressed up like the Big Bad Wolf from Three Little Bears.

It's a portrait on white background, which isn't really my favorite type of photo usually (I tend to prefer environmental images), but the subject matter and ridiculousness of that dog's expression pretty much trump everything.

Sometimes you respond to a photo based purely on emotion and gut reaction, and usually I say, just go with that gut feeling.

WHAT ARE ONE OR TWO OF YOUR FAVORITE MOMENTS FROM PAST SHOOTS:  One of the best moments on a shoot recently was when I photographed Amirah Kassem (creator of Flour Shop). She's one of the happiest people I've ever met, and she was so fun to photograph. I typically ask people to do things in front of the camera. Depending on your subject, some people are up for anything, and others have a clear line of what they will and will not do. Amirah was awesome and up for anything. We had been photographing her with one of her creations - a cake shaped like a giant ice cream cone. When I asked her at the end of the shoot "Hey, would you mind throwing some of the cake around?" she was sooo into it. She immediately dove her hands into the cake and smeared frosting all over the wall in the shape of a heart. That was pretty awesome.

Another great moment was when Carrie Brownstein posed in an Instagram photo with me after our shoot!

IF YOU WEREN'T A PHOTOGRAPHER WHAT WOULD YOU BE DOING INSTEAD:  I have a retirement plan to someday start a floating bed and breakfast on a boat. So I'd love to buy an old beautiful boat, restore it, and turn it into a bed and breakfast for foreigners. I love spaces, and I love meeting strangers. And I don't mind cooking pancakes, so I think it would be good for me. I also have a dream to build an island called "Biker's Island" - it's a vacation island just for bikers.

WHO IS YOUR FAVORITE HISTORICAL FIGURE:  I love this guy - Alex Jordan, Jr. - there's little actually known about him, but he's an eccentric millionaire who built one of my favorite places in the word, The House on the Rock. It's his old house, and it's full of things that he loved - including the world's largest carousel, giant animatronic music machines, doll houses, and a lot more weird and creepy stuff. Walking through his home is not relaxing; you pretty much feel crazy, but it's fascinating. I love that his collection is so unique, and yet he was so private that all we know about him is that he had great taste.

WHAT SONG GETS STUCK IN YOUR HEAD MOST OFTEN:  Hmm that's a tough one. In my family we grew up listening to Cantonese pop music and show tunes. These genres are not ones that I listen to now, but those show tunes seem to be stuck in my head permanently! Often it's a random song from Les Miserables or Anything Goes. I'll be talking to someone, and some random word will remind me of a lyric from a show tune, and then off the song goes in my head. It's probably a lucky thing that this all stays in my head.

WHAT IS YOUR SPIRIT ANIMAL: I've thought about this a lot - especially during that time period when I was reading the Philip Pullman Dark Materials books and everyone had a daemon. I would hope that it's a corgi, but sometimes I feel I might be a bit more shiba inu, with a little bit of a goldfish thrown in.

WHAT IS THE ONE ITEM OF CLOTHING THAT YOU WEAR MOST OFTEN:  Anything denim - specifically I have a Madewell button up denim shirt that goes with almost everything and is super comfortable. I like wearing it for work because it's durable and I don't have to worry about accidentally ruining it while moving equipment around.

WHAT WOULD THE TITLE OF YOUR AUTOBIOGRAPHY BE:  Dogs on Logs, and Other Musings, by Winnie Au

WHAT IS THE HARDEST THING YOU'VE EVER DONE:  I tore my ACL in college while trying to flying side kick my good friend. After that happened, I went into about a year and a half of physical therapy that was pretty painful. Ok it was really painful. I had to learn how to walk from scratch again, and as a 20-some year old non-athlete, that was a difficult thing to do. But the whole experience made me appreciate simple things, like walking. It made me really appreciate dancing. And it mellowed me out - I used to have a lot of extraneous antsy energy (which was causing me to do things like kick my friends for fun), and after my ACL reconstruction I learned how to control my energy a bit better.

WHAT IS THE STRANGEST THING IN YOUR REFRIGERATOR: It's not strange for a photographer, but I have a lot of film and polaroid.

WHAT IS YOUR FAVORITE WAY TO UNWIND AFTER A BUSY DAY: Right now, I like to curl up with my dog Clementine and my boyfriend on the couch, and we'll watch an episode of Orange is the New Black, or I like to play The Walking Dead video game with my boyfriend. A glass of wine is always nice too. 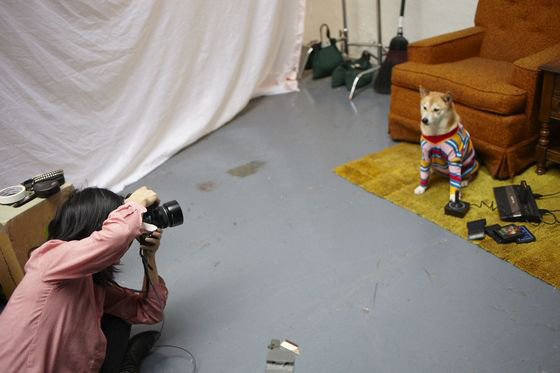 On set with Winnie Au