WHERE DID YOU GROW UP: I grew up on a tiny jungle island called Balabac in the southwest corner of the Philippines. There were no roads or electricity, but there were pet parrots and monkeys, smugglers and pirates, and lots of trees, rivers, ocean and machetes to play with. Basically, the coolest childhood a kid could ask for.

WHEN DID YOU FIRST BECOME INTERESTED IN PHOTOGRAPHY: I first picked up a camera in high school, but I didn't really become interested in photography until my sophomore year of college. I was just scraping by as a semi-dyslexic journalism major when I watched the documentary "War Photographer" about James Nachtwey. My immediate response was, "Wait, that looks way more interesting than sitting behind a computer trying to write a story about intramural soccer.”

WHAT INSPIRES YOU: I tend to get obsessed with things that serve as my main inspiration during that time. I had a four-year period of listening to nothing but Tom Waits. I will regularly find an author and binge read everything they have written (and by read, I mean listen to the audio books). My current obsession is cartoonist and journalist Joe Sacco. His books about the Balkan wars are revolutionizing how I think of narrative structure.

DO YOU HAVE A FAVORITE IMAGE THAT YOU'VE TAKEN: Honestly, not really. I have a really short attention span for my own work so I am always much more excited for what I shot yesterday or what I am shooting tomorrow than I am about what I shot a year ago.

WHAT ARE ONE OR TWO OF YOUR FAVORITE MOMENTS FROM PAST SHOOTS: I definitely have way too much fun on shoots and there are so many favorite moments. In just the last couple of weeks I hung out of the open door of a tiny helicopter over an oil refinery, had a massive man talk me through a deadly weapon system he was building and then minutes later cry while talking about his wife, I convinced one of the most important people in Silicon Valley to balance on a six foot ladder to hug a sculpture, and as I write this I am getting ready to go spend the weekend with American sumo wrestlers. My job really does rule.

IF YOU WEREN'T A PHOTOGRAPHER WHAT WOULD YOU BE DOING INSTEAD: Photography is the only thing that I have fallen in love with that I am any good at, but I also can't imagine doing something that I didn't love. So if I wasn’t a photographer, I would be pursuing one of my childhood passions. But it is a tough market for rock stars, cowboys, super heroes, and Indiana Jones-esque adventurers, so I would have to find another way to pay the bills.

WHO IS YOUR FAVORITE HISTORICAL FIGURE: Marcel Duchamp is one of my favorite figures. His simultaneously irreverent and thoughtful ideas on art are something I reflect on weekly.

WHAT SONG GETS STUCK IN YOUR HEAD MOST OFTEN: “Damn It Feels Good To Be A Gangsta” by the Geto Boys. It is the song we always play after wrapping a great shoot.

WHAT IS YOUR SPIRIT ANIMAL: A jungle cat.

IF YOU COULD ONLY EAT ONE FOOD FOR THE REST OF YOUR LIFE, WHAT WOULD IT BE: Rice is my happy place. There were periods in college when I was broke and survived on rice and soy sauce for weeks on end. I was malnourished but happy.

WHAT IS THE ONE ITEM OF CLOTHING THAT YOU WEAR MOST OFTEN: My black jeans. I wear them pretty much daily, except for when they are getting washed. In that case, I typically wear my backup black jeans.

WHAT WOULD THE TITLE OF YOUR AUTOBIOGRAPHY BE: “I am So Sorry That You Have to Read This” by Benjamin Rasmussen.

WHAT IS THE HARDEST THING YOU'VE EVER DONE: A lot of my personal work is focused in conflict and disaster areas and lowering my guard to have real human interactions in those situations is hard. It means engaging with the pain of others in order to communicate their stories, which is integral to the work, but takes its toll. Dealing with those memories and choosing to go back is probably the hardest thing that I have done.

WHEN'S THE LAST TIME YOU LAUGHED SO HARD IT HURT: The author Jon Ronson has an essay about trying to keep his son from learning the worst swear word. Reading it is the hardest I have laughed in a long time. Definitely worth a quick read: Jon Ronson

WHAT IS YOUR SECRET TALENT: I make a mean cocktail if I do say so myself.

WHAT IS YOUR GO-TO DANCE MOVE: My tried and true move is the old “stand in the corner and judge people while lightly rocking your head to the beat.”

WHAT IS THE STRANGEST THING IN YOUR REFRIGERATOR: Since it is summer, I am trying to figure out a good shrub cocktail, which is a mixture of fruit, sugar and vinegar that you mix with booze. So there is a lot of vinegary fruit syrup in different Tupperware containers from the various experiments.

WHAT IS YOUR FAVORITE WAY TO UNWIND AFTER A BUSY DAY: Abby, my wife/studio manager, and I can't have pets in our apartment. So we go on walks to try and pet the neighborhood cats. We find it much more relaxing than the cats do. 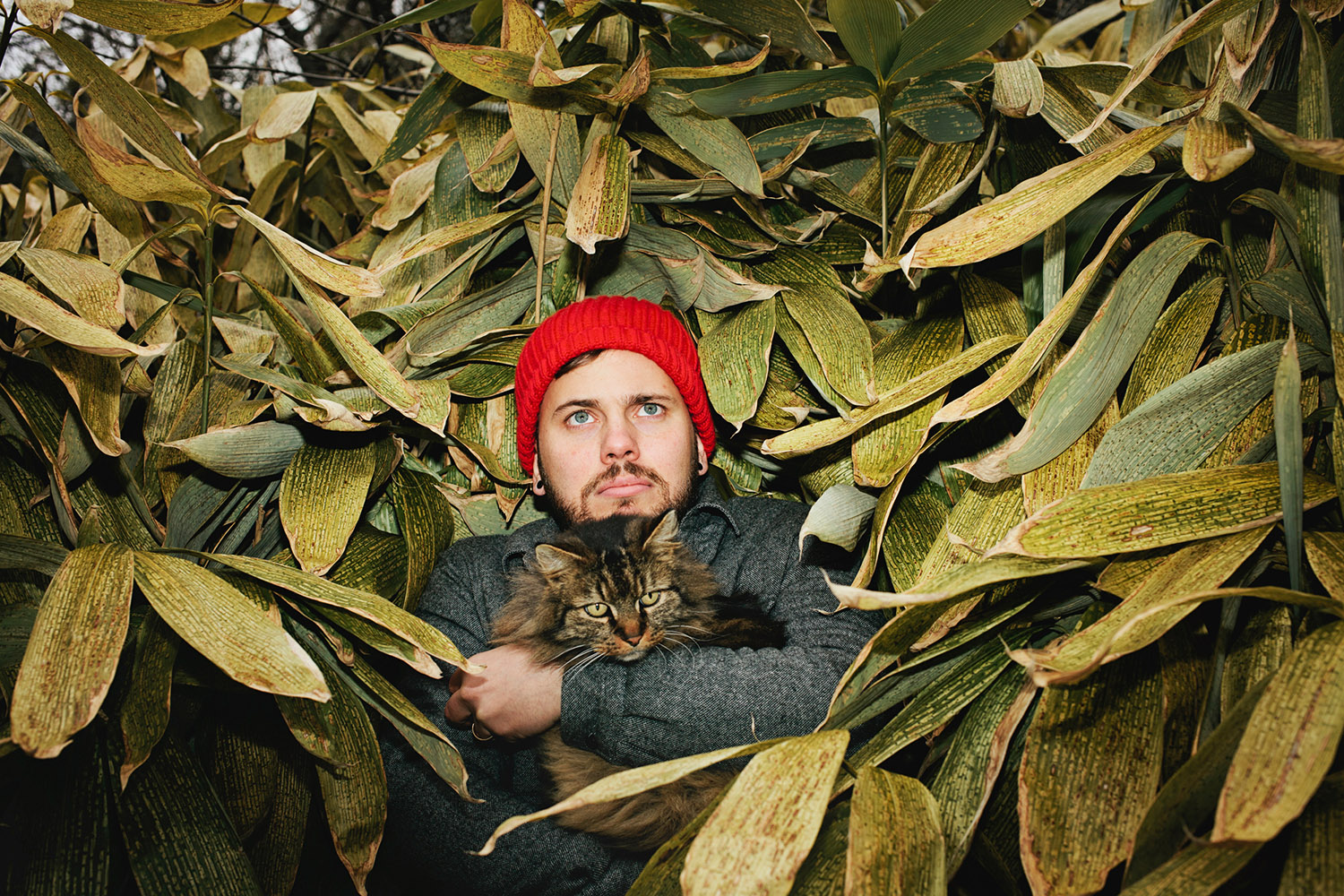